It always bothered me how Super Smash Bros. spelt Brothers without half the word.  I realize it looks so much cooler when you use an abbreviation but, something about it just bothered me.  I mean, you aren’t even saving that much space and Brothers is just as fun to say as Bros. is.  But, ohh well, Nintendo never asked my opinion.  And, Smash Burger never asked my opinion on what I thought of their burgers.  Sadly for them, you, the followers, have asked and now, in 500 words or less, I shall divulge it all to you. 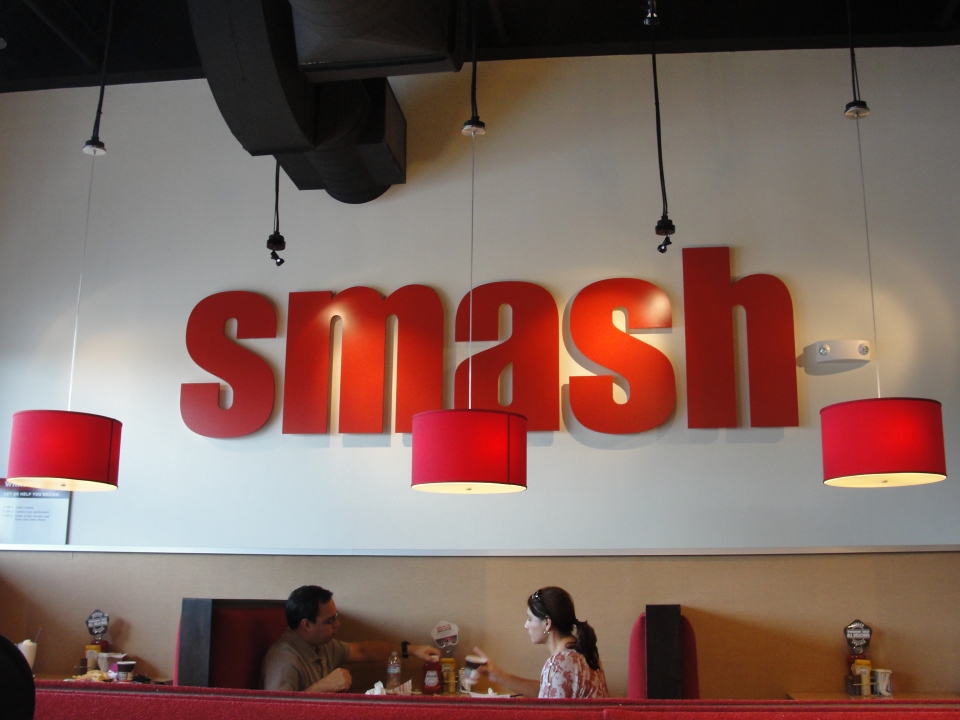 After our trip to BVille, we flew into Ft. Lauderdale.  We had made plans, before we left, to go about 15 minutes out of our way and have lunch at Smash Burger.  I have read mixed reviews on the burger joint yet, it came up in one of my cousins hierarchy’s of food so, we decided it was time to try it.  Smash Burger is yet another burger joint…offering a few burger options, lots of toppings and side items.  After reviewing the menu before we arrived, I knew just what I would be ordering.  Which is a good thing…once inside, the only menu was on the wall – far away and small. 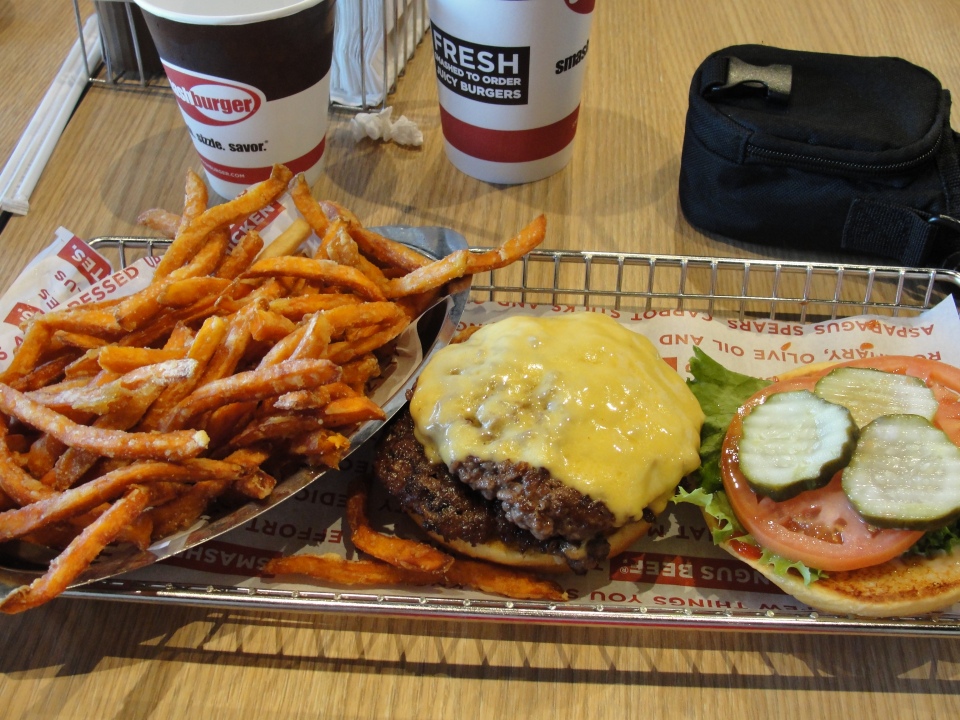 I opted for a Double Burger with American Cheese, Lettuce, Tomato, Mayo, Mustard, Ketchup and Pickles on a Regular Bun.  This is pretty much my standard burger order.  For sides, we went with a side of the Regular Fries, Smashfries and Sweet Potato Fries.  After placing our order, and waiting about 10 minutes, our food arrived to our table.  At first look, the burger appeared to be large, in charge and quite greasy.  While a burger does need a bit of grease to it, I am not a fan of anything overly greasy.  With all doubts thrown out the window, I lifted my burger to my mouth and began a Smash attack.

The first thing I realized, was that this burger was lacking flavor.  Besides the pounds of grease oozing from the burger, the patty itself was not oozing any flavors.  I found the patty to be totally boring and taste like regular old ground beef and grease.  Plus, the crazy amount of grease poured into the bun.  This caused the bun to be soggy and wet – not at all flavorful and moist.  This was nothing like those buttery buns of perfection from Five Guys.  As for the toppings – well, they were good but, they kinda should be.  This is not a difficult task to meat.  I found the toppings to be head and shoulders over the bun and patty.  As for the cheese…it was def American but, didn’t really have any flavor of its own.  I ate my burger, with additional ketchup, but have no desire to have one again.

The highlight of the meal was the sweet potato fries.  These were really good.  No, they weren’t the best I have ever had but, they were pretty darn tasty.  Each and every fry had an extra crisp exterior – almost as if they were twice-fried.  This added consistency and flavor to an overall basic fry.  Every fry was just as good as the next and required no additions whatsoever.  I don’t think these fries were cut on site but, they were some of the better frozen sweet potato fries I have had.

Now, for the Regular Fries and Smashfries, neither were really worth eating.  The regular fries tasted like bad frozen fries – devoid of any flavor or crispness and full of fake-potato-esq flavoring.  I found these fries to be really boring and even with the addition of ketchup, I had no real reason to eat these.  The Smashfries are these regular, gross fries, tossed with olive oil, rosemary, salt & pepper.  These fries were very oily and very heavy on the rosemary.  By far, the rosemary was the one spice that really stood out.  I guess these were better than the regular fries but, they were still really not that good.  Why waste good calories on bad fries?

While the actual Smash Burger restaurant location was quite lovely, the food was anything but.  I found the burger and fries (with the exception of the sweet potato fries) to be nothing great at all.  Plus, these burgers were not cheap and almost all add-ons, came with additional fees.  Next time I am in the area, I will find somewhere else to eat…I don’t really plan on ever returning to Smash Burger.  I wasn’t expecting this to be Five Guys but, I was at least expecting a whole lot more than I got.  I went in without a T, H, E or R and left without them as well.

← The Wait Before the Q
Pumpkin Pasties →