I have often times seen food shows displaying Quaker Steak and Lube but, until our recent trip to Cincinnati, had never eaten at one. Quaker Steak is known for their wings and boast that they have won world championships with their BBQ Wings. They also offer like 75 different flavors of wings so, you have a lot to choose from. We decided to stop in for lunch on Taylor’s Birthday (July 4th) while in Cincinnati. Even though I did not eat wings, I am glad that we tried it and would certainly go back again.

We arrived at Quaker Steak around noon and it was pretty empty. I was impressed by the large menu selection and had a few choices to narrow down. I opted for the Grilled Boneless Wings (Honey Mustard Style) with the Premium Pretzels. I love soft pretzels. They are one of my favorite foods of all time. I was beyond stoked that they offered this. Mommy ordered the BBQ Wings with Onion Rings and Taylor ordered the BBQ Wings with Magna Fries.

The food arrived hot and quickly and it looked great. The wings were large and the Magna Fries looked killer. I was excited to see that I got 3 pretzels and was ready to dig in. The Grilled Boneless Wings were basically just pieces of grilled chicken in the honey mustard wing sauce. They were cooked perfectly and the honey mustard flavor was good. It was different and I could taste hints of bbq sauce within it. Not to the point where it was overpowering…just to the point where I could taste it. My only complaint is that the order of chicken seemed somewhat small. It was only lunch time however, so, this did not affect me too much. Overall rating: 8/10. 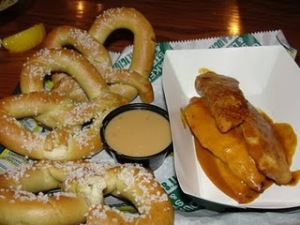 The pretzels were covered in salt, which I did remove most of. They were all very soft and warm. The pretzels were served with a cheese/beer sauce that I did not care for at all. I enjoy my pretzels plain and, if they did desire a dipping sauce, I think regular cheese sauce would have been much better. The cheese/beer sauce was very running and had strange after tastes. The pretzels had a great flavor and were very similar in taste to a GABP Pretzel. I am glad that even though they were small, they kept the pretzel size. I am not a fan of ‘pretzel bites.’ I would most definitely order these again. Overall rating: 9/10.

The onion rings were crisp and large. They did not have a fake onion taste and the crispiness was good throughout. I was impressed by the size of them and would certainly have them again. I only got to try one but, they were good. Overall rating: 8/10 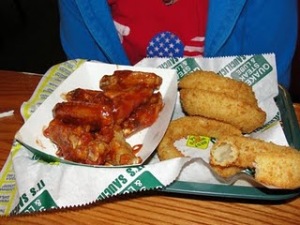 I can’t really give a good review of the Magna Fries because I only had two fries. The two fries that I had did not include any of the ‘magna’ toppings. The fries did have a very ‘natural’ look to them and were cooked well.

Both Mommy and Taylor enjoyed the wings and said they would certainly have them again. They were impressed with the size of the wing and the flavor of the sauce. Quaker Steak was very reasonably priced as well, which is something you don’t always see at Wing Places.

I will most definitely return to a Quaker Steak and Lube again. I am sad that we do not have one closer to us. The pretzels are a must for anyone who enjoys soft pretzels. I plan on trying the Magna Fries as well and perhaps some of the other menu items that looked appealing. If you have a Quaker Steak & Lube near you, be sure to check it out.