August 26, 2011
Sometimes you try a restaurant for the first time and you really just don’t like it. It may not be too bad but, it just wasn’t what you were expecting. Every so often, you get lucky and find a restaurant that is great the very first time you go. For me, that was the case with Steamers Seafood in Naples. First time – delicious. Will I return? Most definitely.

Steamers Seafood is known for their well, seafood. They have many house made chowders available as well as seafood prepared in a number of ways. I was there for the Lobster Roll. Steamers does not have a menu online and their menu in store, does not give you true descriptions of their items. The Lobster Roll consists of fresh lobster mixed with seasonings and mayo (served cold) on a warm hot dog like bun. I ordered the Lobster Roll along with the onion rings and fries. I was ready to chow down. 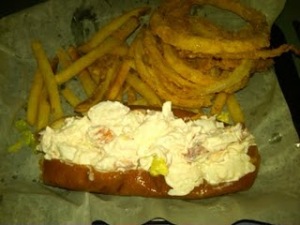 My meal arrived and looked great. The lobster roll looked very full and I could see many large chunks of lobster. The fries and onion rings looked pretty good as well but, I was really there for the lobster roll. I picked up my lobster roll and took my first bite. Yum. My first bite was mainly all lobster and I had to take a second to get the bun in there as well. The lobster was large and flavorful and the bun was soft and warm. The combination of the lobster and the roll was absolutely amazing. The lobster was very fresh and the seasonings combined with it did not overpower the taste of the lobster. The mayo that was used to combine the lobster and seasoning, did not have a thick taste or consistency to it either. The bun was so soft yet wasn’t too soft. This was key in holding all of the lobster without a problem. The bun had a buttery, sweet taste to it that complemented the lobster. Every bite that had both bun and lobster, were just amazing. The lobster roll was $16.95 which was market price. I’m not sure how much this price varies as the year goes but, it was a bit pricey. Lobster is pricey so, it was within the range I was willing to pay. However, this is not something that I would be able to go eat on a weekly basis – especially if the price variation is very large. Overall Rating of the Lobster Roll: 9/10

The fries and onion rings were just your usual fries and onion rings. The fries were a bit lacking in flavor but, my purpose wasn’t the fries. The onion rings tasted different than regular onion rings. I enjoyed this taste as they were not overly battered with the fake onion taste. They were crisp and light. I don’t think the rings or fries complemented the lobster roll at all. I actually ate all of the fries and rings before I finished my lobster roll. Normally, I like to eat everything together to mix and match the flavors. Overall Rating of the Fries: 5/10. Overall Rating of the Onion Rings: 7/10

I was very impressed with my first visit to Steamers Seafood and will most certainly be visiting again. The lobster roll was awesome and I recommend trying it. My only complaint was the price but, as I mentioned, I was expecting the price to be high so I was not surprised. And, you do get a lot of lobster in the roll along with a side for this price. I will also try one of their chowders next time I visit – and there will certainly be a next time. Nothing says seafood like lobster on a nice warm bun. Mmmm mmmm mmmm…delish.