The Cookie That Dominates the Once All Powerful Tagalong

A few months back, I wrote a review about the Girl Scout Cookie called the Tagalong.  Since I know you read and treasure every review on this great blog, I know you remember it.  That cookie once held such a spot in my heart that I never thought I could replace it.  I was beyond disappointed with the Tagalongs this year and I have no plans of buying them ever again.  Plus, why would I (or you for that matter) ever want to?  I have the cookie that simply dominates the once All-Powerful Tagalong.  That cookie is the Keebler Peanut Butter Filled Cookie.  And yeah, it’s so up for the challenge. 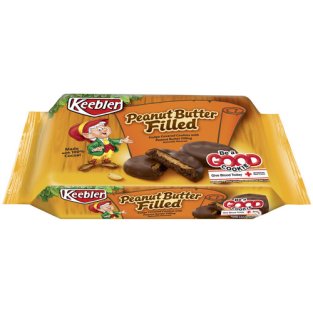 These Keebler cookies are not new however, it’s been a really long time since I have had them.  The last time Keebler’s were BOGO at Publix, I picked these up and they have been in my lunch packing routine.  Well, I finally came around to actually trying some of them last week.  I placed two of them in a Ziploc bag in the fridge one night and ate them the next.  I figured they would be good but nothing like Tagalongs used to be.  But, after a one-two-punch, these cookies dominated the Tagalongs of the past in an easy breezy style.

When I removed these cookies from the Ziploc bag, I was surprised at how big they appeared to be.  The circumference was a usual size but the thickness of the cookie was certainly quite noticeable.  I decided to bite right into the cookie.  I bit through a simple, yet yummy layer of chocolate followed by a huge layer of peanut butter and crunchy chocolate cookie.  While I could taste each layer of the cookie on its own, the mixing of the layers was even better. 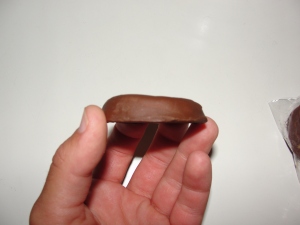 Let’s begin with the exterior coating of chocolate.  The chocolate was in a thin layer around the entire cookie but I did not feel as if I was being jipped for chocolate at all.  The flavor of the chocolate was milk and it was somewhat creamy.  This wasn’t the best chocolate I have ever had but, it was really good for a cookie.  I felt as if it worked perfectly with the cookie but, if it was on its own, it probably wouldn’t have been able to hold up to much. 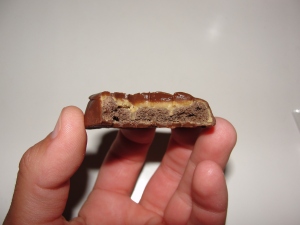 Once all of these cookie parts were put together, the end product was simply dominating.  I loved every single bite I took of the two cookies I tried.  While I chewed each bite, my mouth was overwhelmed with the thick peanut butter, the creamy chocolate and the crunchy chocolate cookies.  Delicious.  What made these cookies even better is the fact that they were stored in the refrigerator.  I really think that gave them the extra punch they needed to elevate them so high in my palate.  Since Tagalongs had been one of my favorites for so long, I was pretty bummed this year when they were so bad.  But, after eating these Keebler Peanut Butter Filled Cookies, any bumness I felt has been knocked out the window.  I am glad to say I have found, sampled and loved the Cookie that Dominates the Once All Powerful Tagalong.

← I Should Have Stayed Home
Doesn’t Get Any Better →