I feel as if self-serve froyo places are popping up all over the place.  I mean, literally, all over the place.  A few years back, we had none of these locations in Naples and now, we have one in almost every big shopping area.  Are this many locations of the same thing, really needed?  Yes, I understand you all have different flavors and toppings but, in the end, you are all self-serve froyo.  While I do enjoy this every so often, I also enjoy normal hard ice cream.  You know, the kind you watch the lady behind the counter scoop out for you, throw it on a cone and call it a day.  While I can not get any of my beloved Graeter’s this way in Naples, we do have a number of ice cream locations.  After our dinner in Tin City a few weeks back, we treated ourselves to some of that Normal Ice Cream.

Located inside Tin City, M&Ms Cafe feature Royal Scoop Ice Cream.  Now, they do have a menu with food items as well however, in all of my visits, I have only ever seen people get ice cream.  Royal Scoop is local to the area and served at a few different locations throughout Naples.  We arrived and viewed all the available flavors – quite a lot of them.  Nothing was jumping out at me so, I decided to go with the Chocolate Peanut Butter – displayed as Chocolate Ice Cream with a Peanut Butter Swirl.  As I was placing my order, the girl working the counter told me that if I really liked Chocolate and Peanut Butter, I should add some hot fudge and hot peanut butter to my ice cream.  Did this girl know me already?  How would she know I was a sucker for this?  Of course, I said yes.  I mean, was there really any question to that?

As the girl began preparing my order, I was thinking to myself maybe I should have just gone with the Normal Ice Cream in the Normal Waffle Cone.  But, what the heck – right?  You gotta live.  My bowl arrived and the outside felt hot to the touch.  I paid and dug right in.  Basically, my bowl consisted of the Chocolate Peanut Butter Ice Cream, Hot Fudge, Hot Peanut Butter and a Waffle Cone on top.  I began with the ice cream which was all mixed with hot fudge and peanut butter.  Actually, the first bite or two, contained no ice cream.  But, since I am someone who regularly melts peanut butter and eats it with a spoon, this was just fine by me.  The hot fudge was hot, thick, gooey and delicious.  Every single bite of it contained all of these features and, even at the bottom of the bowl, the hot fudge was still thick & gooey albeit, no longer hot.  While the fudge flavor was not overly dominant, it was there and the fact that it was so thick & gooey, made up for any lacking flavor. 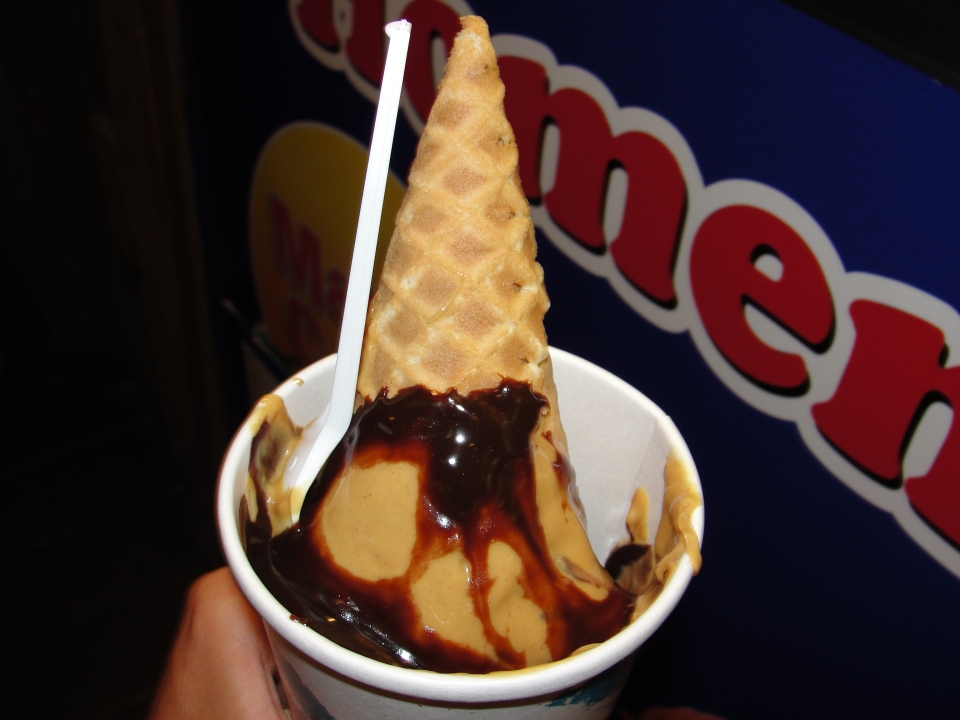 Also, I need to mention the waffle cone.  I ate the cone both with the ice cream, and on its own.  Overall, I found the waffle cone to be pretty good.  The texture was right on so it was crunchy when you bit in but then melt in your mouth as you continued to eat.  Plus, the flavor was that sweet vanilla base that every waffle cone needs to be.  I finished my creation with pretty mixed feelings.  Yes, I enjoyed the cone, Hot Fudge and Hot Peanut Butter but no, I did not enjoy the ice cream.  Isn’t that the point?  Well, for me, on this visit, the point was getting to be with family which was indeed accomplished.  If you are looking for a break from those darn froyo locations, grab your family and head out for some Normal Ice Cream.  Even if the ice cream sucks, the memories will more than make up for it.

← In the City
Third Times a Charm →