63 Has Reported as Eligible

This past weekend, we decided to go to the Dolphins Game.  I was able to find tickets on Craigs List for $37.50 each – an excellent deal for an NFL Game.  We headed over on Sunday with plans of eating once we arrived to the stadium.  The Fins play in Sun Life Stadium however, it had been since 2008 that I was there for a Dolphins Game.  While the Marlins were still there, I visited for Reds games however, I only ate there a number of times.  I remember when we were there in 2008 for the Playoff Game, venturing down to the lowest level in search of Dippin Dots – which I did indeed find.  However, beyond that, I don’t recall any food item leaving an impression on me.

The first thing I realized was that this stadium was expensive.  Yes, all stadiums offer overpriced food but, Sun Life is by far the most expensive.  A refillable souvenir cup?  11 bucks.  A full $3 more than Ray Jay and Marlins Ballpark.  Plus, all the food was pricey too.  We arrived to a sky full of clouds and the prospect of rain was quite likely.  After walking around on the ground level, we headed up to our seats.  Before sitting, we decided to eat.  I surveyed my options and, in the end, went with the Loaded Tater Tots.  Since there were no description of this, and the menu board do not display this in both English & Spanish (see Marlins Ballpark), I had no idea what I would be getting. 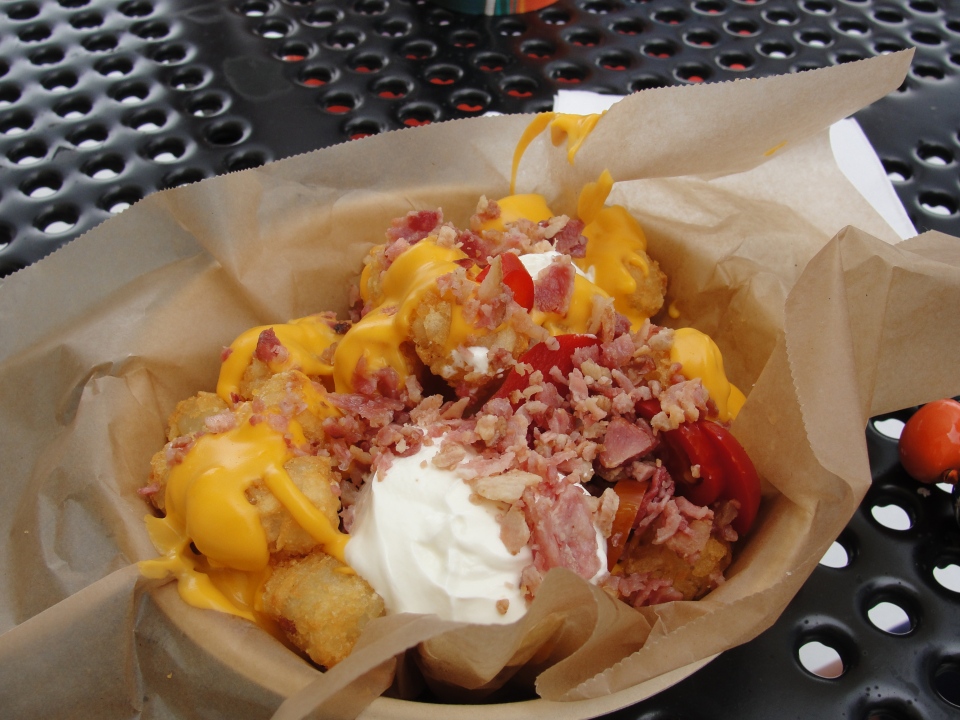 After paying my $8 and waiting a few moments, I was presented with my food.  Served in a bowl, I was somewhat taken back by my first look at the Loaded Tater Tots.  The bottom layer consisted of Tater Tots.  Then, there was a layer of nacho cheese sauce, bacon bits, a scoop of sour cream and a few slices of red peppers.  The bowl was in no way hot but, I took it back to our area.  I started off with the tots that were either void of toppings or had only cheese.  While the tater tots were just your typical frozen tots, they were amazing.  I have a real thing for tater tots.  Like I just love them.  Love them so much so that, on occasions I buy them for home, I will have just them and a veggie for dinner.  So fantastic.

While the cheese sauce was also just your basic canned nacho cheese sauce, it had a good flavor.  It was a bit on the spicy side and mixed well with the tots.  Neither the tots nor the cheese were really all too hot – a bad thing overall.  If these two ingredients would have been warmer, I think the overall flavor would have gone way up.  I picked around most of the bacon bits but, the pieces I did get were fine – luckily the bacon taste was not overpowering.  I’m not really sure where the sour cream came in (my only thought is the copy of a loaded baked potato) but, I did enjoy it.  It was especially good on tots that had a lot of cheese sauce.  As for the red pepper slices, they will be a mystery.  I opted not to try any of them for no real reason.  Mommy had one of the peppers and said it was spicy however, she did not know exactly what type of pepper it was. 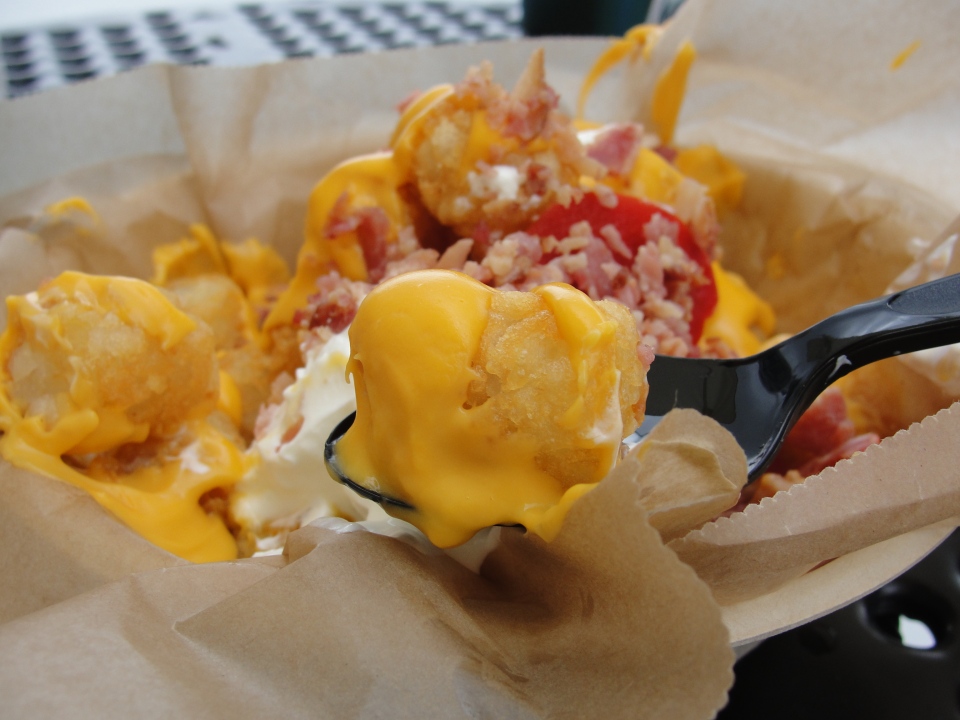 Overall, I enjoyed the Loaded Tater Tots but, I think the $8 price tag was far too high.  These are really more of a side item than a main item.  This was the only thing I ate at the stadium, aside from peanuts, and it really did not fill me up at all.  The best part was the core – the tater tots.  So simple.  So pure.  So delicious.  I wasn’t overly impressed with the selection of food at the stadium, which is probably why nothing ever left an imprint in my mind.  We had a nice day at the stadium.  Aside from some rain, and the Dolphins losing, it was a fun time.  Plus, we got to witness these great temporary NFL Refs.  And, for anyone lucky enough to be at the game (I’m not sure if home viewers heard this too), 63 Has Reported as Eligible.

← Candy We Call Corn
A Chewy Let Down →