It always comes as a Shock to people when I tell them how much I don’t like Thanksgiving.  I think it is, by far, the biggest waste of a Holiday ever.  Of course, I don’t mind getting off work for 2 days but, for the day of Thanksgiving itself, I see it as an absolute waste.  I don’t like Thanksgiving Food and the concept of sitting on the couch all day, is enough to make me puke.  Lucky for me, we opted to eat out for Thanksgiving again this year.  This is far better than spending 12 hours in the kitchen, prepping, cooking & cleaning.  So, yesterday around 4pm, we went down to the Marco Island Marriott for their Thanksgiving Buffett.  And yes, it was mighty tasty.

The Marriott wasn’t taking reservations but, they assured us they wouldn’t be needed.  After arriving, we only waited 15 minutes before being seated.  Now, my biggest beef of the night (besides the photo hoarders) was the way the restaurant was setup.  The seating was very Chef Mickeys-esq with far too many people in far too small of a spot.  And, the buffet, had no order whatsoever.  Most items were not labeled and there were no true lines.  Besides that, I found the rest of the meal to be pleasant.  For $55 you received the full buffet and coffee/tea.  After pricing the other options, this was pretty much spot on.  I am going to do this review, plate by plate.  So, hold on to your seats.

Plate 1 consisted of salad, bread and cheese.  The salad was very good with all pieces being cold, crisp and fresh.  I probably could have had 2 more plates of salad, and thinking back now, I def should have.  Nothing beats starting a meal with a nice salad.  I opted for ranch as my dressing but, used just a little bit of it.  A little bit was more than enough to give my lettuce, tomatoes, cucumbers & cheese some extra flavoring.  The cheese pieces were cheddar & blue cheese from the cheese bar.  The blue cheese was very mild but, the cheddar was really good.  I enjoyed it greatly and felt the flavor was spot on.  I also had a few bites of tomato & mozzarella salad on this plate – this stuff was awesome.  Totally awesome.  So fresh & tasty.  As for the piece of bread, this was multi-grain and a bit dry.  The flavor was okay but, nothing too amazing.

Plate 2 consisted of french fries, peel & eat shrimp, tomato & mozzarella salad and cheddar cheese.  Now, the french fries you see are about half of what I actually got.  I ate the rest on my way back to the table…jeesh, I have no manners.  The fries were off the kid station and were probably good right when they were cooked.  They were your basic fries but, nothing that amazing.  Now, the peel & eat shrimp were killer.  These shrimp were huge, fresh and so tasty.  They were served cold and, after peeling, I ate mine with cocktail sauce.  The cocktail sauce was just spicy enough that it really complimented the juicy shrimp.  You already know how rocking the tomato & mozzarella salad was, and the tasty cheese. 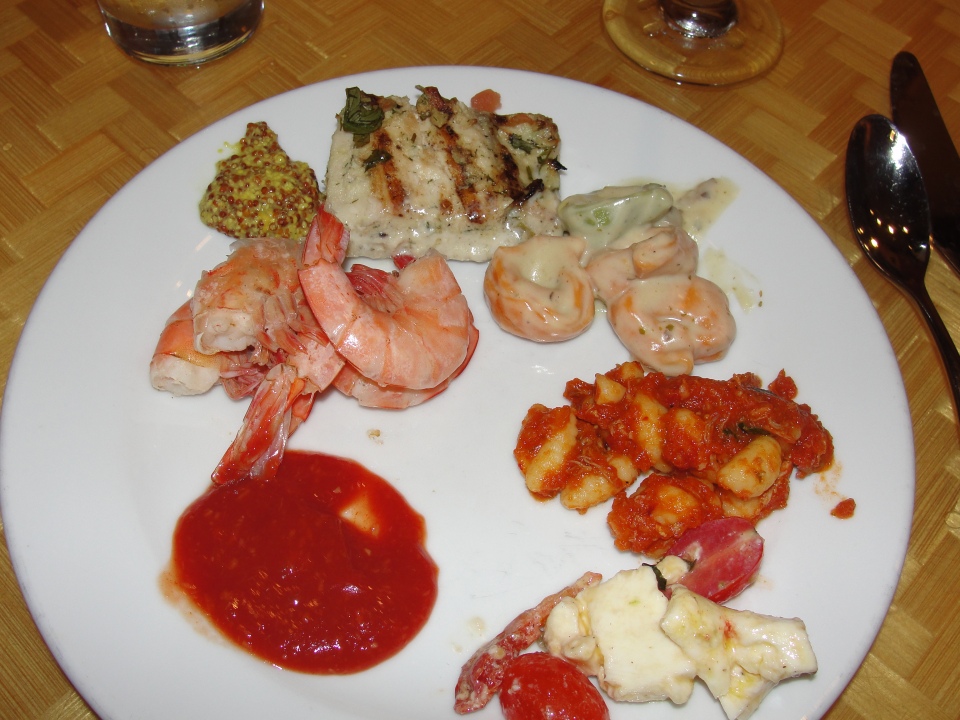 Plate 3 consisted of peel & eat shrimp, swordfish, tortellini, cavatelli and tomato & mozzarella salad.  Besides the peel & eat shrimp off my plate, I also helped myself to a large plateful that we brought for everyone.  Delicious is the best way to sum these suckers up.  The piece of swordfish I had was very moist & tasty.  I enjoyed it with some fresh mustard (look at the size of those seeds) and cocktail sauce.  This fish was cooked perfectly and on a buffett…go figure.  The tortellini was cooked with spinach, artichokes, mushrooms and cheese and was really good.  It was so creamy and warm.  Now, the cavatelli was cooked in mariana sauce with some sort of meat.  I’m not sure what the meat was but, it was spicy and I didn’t love it much at all.  Even with just eating the cavatelli pieces, the spice was there. 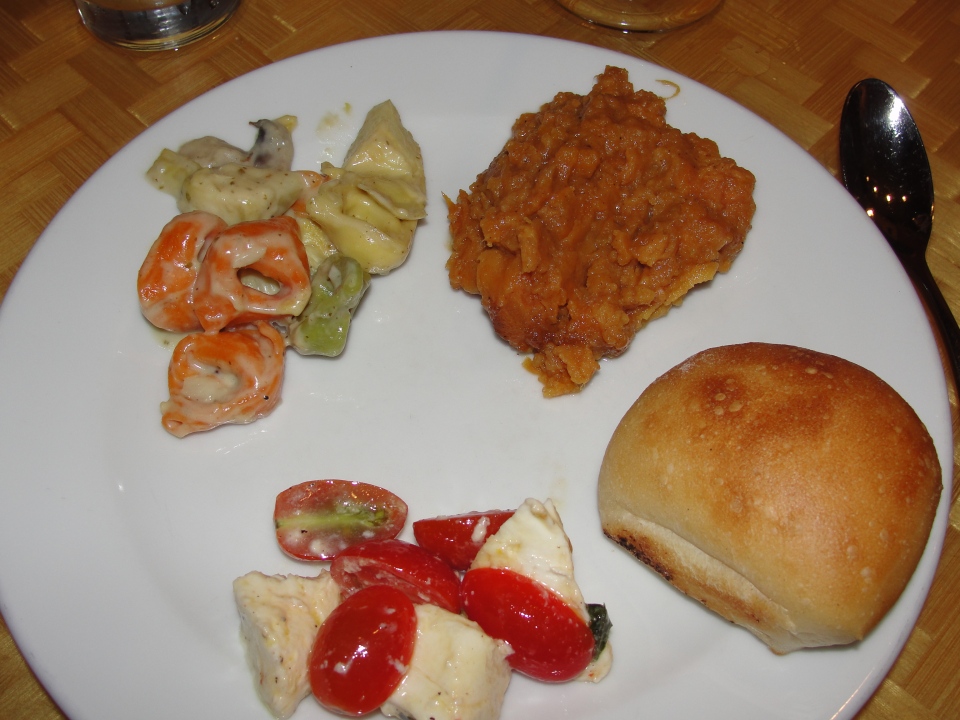 Plate 4 was more tortellini, sweet potatoes, a roll, tomato & mozzarella salad and some peel & eat shrimp that didn’t make the photo.  Now, the sweet potatoes were labeled as sweet potato casserole, but, this was more along the line of seasoned mashed sweet potatoes.  I did not taste any marshmallows or syrup – rather, I felt as if the sweetness came in the form of sugar & orange juice.  Every bite had a bit of a citrus flavor to it, similar to orange juice.  While I prefer the sweet potatoes I make at home, these were pretty good.  The roll I tried this time around was also a bit on the dry side and lacked flavor.  This probably would have been better with butter.  And, let me just say, the tomato & mozzarella salad was the best I have ever had.  When I say the cheese was fresh, it’s an understatement.

Plate 5 consisted of desserts.  A pumpkin spice cupcake, chocolate moose/pudding, a mini-pecan pie (I think), a tart, a mint-chocolate wafer, fried apple pie, mini apple pie and a scoop of cinnamon ice cream.  The pumpkin spice cupcake was very moist and I could taste the scents of fall.  I don’t think the icing was really needed and I didn’t eat most of it.  The chocolate moose/pudding was great – dark chocolate on the top followed by creamy, cool pudding on the inside.  I finished this one first and should have had another.  The mini-pecan pie was cold, a funky consistency and not very good.  I tried two bites of it and was pretty much over it.  I think the tart was a tart but, the flavors were just really lacking and I’m not quite sure what it was.  The mint-chocolate wafer was very good – merigune-esq on the outside with a soft & chewy layer of chocolate on the inside.  Fried apple pie, made seconds before I ate it, was beyond divine.  Oh. My.  This was good.  More on this in a bite.  The mini apple pie was cold and really lost points because of this.  Cinnamon ice cream is one of my favorites, and this scoop lived up to every expectation I had for it.

Plate 6 where were I called it quits.  I could/should have had another plate of salad and warm food before desserts but, ohh well.  Next time.  On my final plate was a piece of pumpkin pie, oatmeal raisin cookie and another fried apple pie.  The pumpkin pie was fine but, it’s just not my cup of tea.  I had a few bites and it tasted pumpkiny.  I spotted these cookies in the beginning and I thought they looked killer.  Yes, it was a good cookie but, not the best I have ever had.  I did enjoy the addition of walnuts to the cookie and found the flavor to be solid.  And yes, I had 2 fried apple pies.  The exterior was so light & crispy with a generous covering of cinnamon and sugar.  The cinnamon & sugar on the outside, added an extra layer of crisp to the pie.  On the interior, the apples were soft & sweet and complemented the crust so well.  By far, the winning item of the night.

So, as you can see, I enjoyed my food.  While I still don’t like Thanksgiving, I love being able to go out and get all of these non-Thanksgiving options.  I would return back to the Marriott but, also suggest to them, a change in a few things.  We all enjoyed our meal and had a really nice night overall.  I do hope you all also enjoyed your Thanksgiving.  While I have too many things to be thankful for, I consider myself truly blessed to have a mom & brother I can call best friends.  Happy Turkey Day, Happy Black Friday and Happy Eating.

← Just Do It
Lick Lipping →