Sometimes I hype myself up for a product from simply seeing a photo of it or a description of it.  I don’t have to know much else about the product to produce this crazy hype feel deep within me.  Unfortunately, most of the time when I actually get to try the product, it sucks.  Or if it doesn’t suck, it is just sub par.  So is the case yet again with the M&Ms Snack Mix.  I saw an ad for this in Mommy’s All You Magazine along with a coupon.  I ripped out that coupon so fast and searched down the Snack Mix.  After looking for almost 2 weeks, I finally found it.

M&Ms Snack Mix comes in 3 varieties – Milk, Peanut and Dark.  Each variety features the M&M along with a few other items.  I got myself so pumped up on this just from the magazine ad.  When I was actually presented with it, I didn’t feel quite as excited.  Perhaps this is because it carried with it a $3.19 price tag at Publix for an 8 oz bag.  Wow.  Seeing that price took a lot of the air out of me.  At least I had my $1.00 off coupon which I, of course, used.  Since this was my first time with this product, I opted to keep it simple and go with the Milk Chocolate variety of the M&Ms Snack Mix.  I purchased my bag and headed home.

After eating dinner, I whipped out the M&Ms Snack Mix bag and was ready to try it out.  The bag states to ‘Mix it Up’ because the product may settle.  I did just this and mixed it up prior to opening it.  But, once I opened it, I realized that the mixing did not really matter.  I peeked into the bag and all I saw was Peanuts.  What?  Where is everything else?

The Plain Snack Mix is said to have Peanuts, Roasted Pretzels, Mini Chocolate Chip Cookies and of course, Plain M&Ms.  Well, all I saw at first were tiny little pretzels.  Okay then.  I poured out a small handful of the mix and reviewed all of the pieces, one at a time.  I started with the Pretzel.  It was small and very crunchy but lacking the traditional pretzel flavor.  While the pretzel did not taste like the other components of the bag, it didn’t really taste like a pretzel either.  It was at least crunchy, right?  Next, I tried the Roasted Peanut.  Well, let’s just say it was the smallest peanut I have ever had and did not taste roasted at all.  It was mushy (if a peanut can be mushy) and lacking any flavor at all. 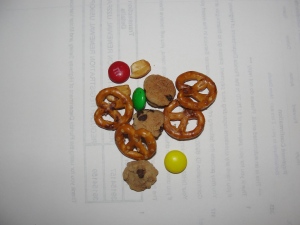 I then moved on to the Sweet parts of the mix.  First off was the Mini Chocolate Chip Cookies.  Well, mini is certainly the case.  These cookies were small.  Before I ate one, I was fearful that it would be stale in consistency and lacking in flavor.  Lucky for me, neither was the case.  The mini chocolate chip cookie was extra crispy and just sweet enough – surely the star in the mix.  As for the M&M’s, they were basic plain M&Ms – they were good and luckily pretty fresh tasting.  Sometimes in trail mix, you get gross M&M’s but these were certainly not gross.

While all of the parts of the snack mix were just okay on their own, I can’t say it got much better when they were all combined.  As I was eating a handful of the snack mix together, the main piece I tasted was the pretzels.  There were just so many of them that it overpowered everything else.  Here and there while I was chewing, I could taste the M&Ms or the cookies but never did I taste the peanuts.  The flavors really didn’t combine to create a good final product.  They didn’t even really combine to produce a sub par product.  They were kinda just all on their own, not being harmonious, but certainly being sub par.

After I tried my portioned out Snack Mix, I was pretty much over it.  I decided to be fair, I would try it again the next day.  After more bag mixing, I came into more M&Ms but, the end product was still nothing too great.  I will probably end up trying the Peanut and Dark varieties but will go into them with far lesser expectations.  If I am looking for a mix of sweet and salty, I think I will just stick with traditional trail mix.  M&M’s could have totally rocked up this snack mix but, the use of too many pretzels, not enough flavors and unharmonious pieces resulted in a sub par snack.